Generations of TV viewers have watched I Dream of Jeannie, the classic 1960s sitcom about an astronaut who brings home a 2,000-year-old female genie.

While the premise might sound silly, viewers tuned in and laughed, thanks to the talented and beautiful actress at the center of it all: Barbara Eden, who played Jeannie.

Fans might find it hard to believe, but Barbara is now 90 years old!

And while it’s been a long time since she’s worn her famous harem outfit on TV, she’s still going strong and keeping busy.

But life hasn’t always been easy for Barbara…

Turning 90 is a big deal for most people, but in an interview with the Hollywood Reporter in 2021, she said she feels that age is but a number.

“It’s like any other birthday, I’m just happy to be here,” she said. “I really don’t think about it. Everybody else does but I never have. I’m looking forward to going back to work.”

Despite her age, Eden is far from retired. She’s continued to work — and only a global pandemic could slow her down: “I was working up until the shutdown point last March,” she told the Hollywood Reporter.

In fact, Eden revealed that, despite taking all health precautions, she and her husband tested positive for the coronavirus, although thankfully she had only a mild case and received antibody infusions: “It was the lightest case of COVID I think anyone’s ever had in the whole world.”

Otherwise, Eden continues to be in good health: “I think the secret to feeling great is to keep active, do things that you love and have a good sense of humor,” she told Closer Weekly.

Now, Eden is eager to get back to work, and has a few projects lined up. She authored a children’s book called Barbara and the Djinn, about a subject Eden is familiar with: a girl who finds a genie.

“The story follows a little girl on a journey of finding these beings who are different, but who need help,” Eden wrote on Facebook. It’s very simple, and it’s all about understanding people who are different and having empathy and love for them. We need more empathy, love and understanding in this world, especially now.

She’s also looking forward to performing again, and already has a show lined up for next February, appearing in a show with impressionists The Edwards Twins.

“I’ll do a little singing and we’ll probably have interaction with the audience,” Eden told the Hollywood Reporter. “It’ll be fun. I’m really looking forward to it.”

Looking back on her career

While Barbara Eden will always be best known for I Dream of Jeannie, she’s had a long and successful career in the industry.

Barbara Eden was born in Tucson, Arizona, United States, in 1931. After her parents’ divorce, she moved to San Francisco, and there she began her career studying voice at San Francisco’s Conservatory of Music.

Barbara sang in local bands at local nightclubs in the Golden Gate City as a teenager. But after a while, she also decided to study acting.

“My mother said, ‘Barbara, you don’t sound like you mean a word you’re singing. I think you should study acting, too,’” Eden recalled to Closer Weekly.

Acting proved to be a good fit, and soon she moved to LA and began appearing on some of the biggest shows of the ’50s. She was a regular on The Johnny Carson Show, and had guest roles on Perry Mason, Gunsmoke, Father Knows Best, and made her sitcom debut on I Love Lucy, making a splash in a dress bedazzled by Lucille Ball.

“They sat in her dressing room and they punched little sparkly things all over that dress, just to make it look prettier,” Eden said in an interview. “I don’t know many stars that would do that — even if it is their own production.”

“I don’t know many stars that would do that,” Eden said of Lucy’s costume decorating.https://t.co/s38pCD90rP

‘I Dream of Jeannie’

Eden had her first starring TV role in the syndicated sitcom How to Marry a Millionaire.

But of course, it was I Dream of Jeannie that made her a legend. The sitcom was a fan favorite and ran for five seasons. Part of what made the show so magical was the chemistry between Eden and her co-star, Larry Hagman.

“We just … we clicked. We had the same rhythm. We’ve got the same truth out of whatever we were doing,” Eden told Closer Weekly.

“I loved him a lot. Some actors you have to work at really liking them … and you put it in another box in your brain. But with Larry, I never had to do that. He was there constantly.” 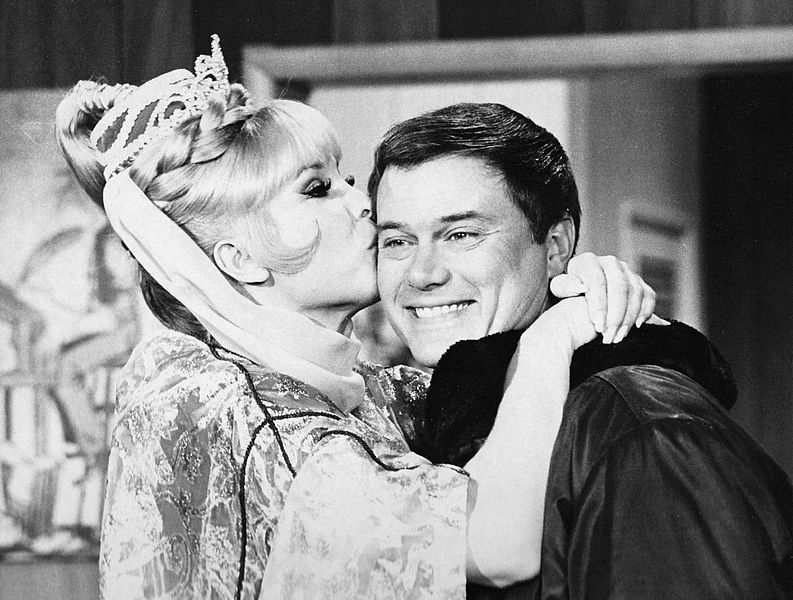 Another thing that made Jeannie a sensation: Eden’s harem outfit, which was considered a bit scandalous for TV at the time.

“Executives at NBC got very frightened,” she told Today in 2015, near the show’s 50th anniversary. “They became very strict about the navel.”

And Eden said it was actually another much older interview with the Hollywood Reporter that helped spread that legend, after her friend and columnist Mike Connolly kept teasing her about the issue.

“When Mike came in and started teasing me about my belly button, it spread like fire and spread around the world. We had a good time with it and I would tease him back, but I had no idea it would become something.” 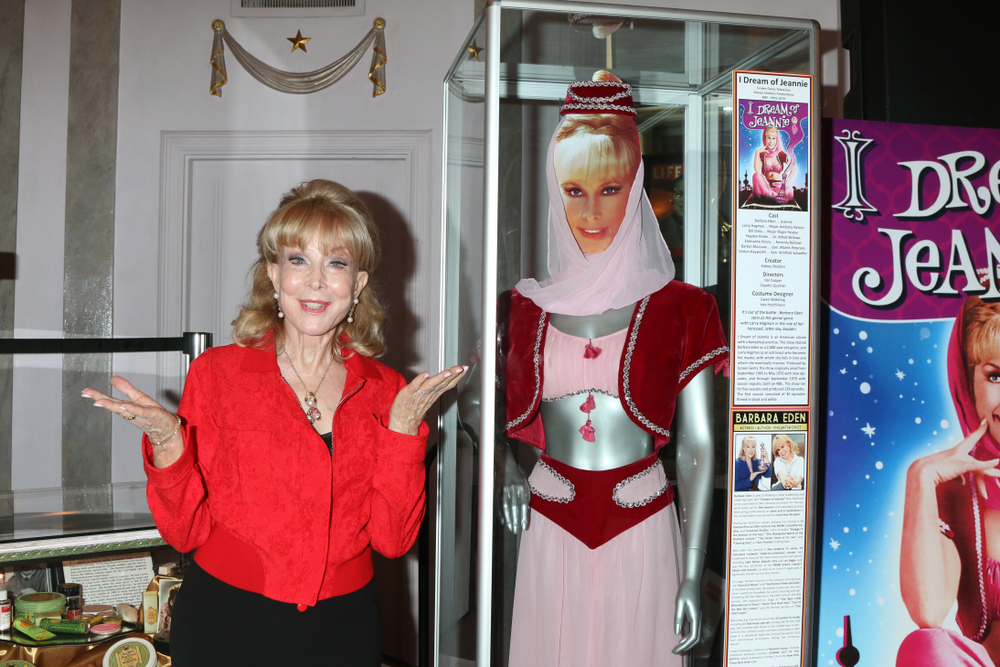 The iconic costume also solidified Eden as a TV sex symbol for many people — including high-profile admirers like Elvis Presley and John F. Kennedy, who sent her his phone number.

“I binned the piece of paper, but I wish I still had it,” the actress wrote in her 2011 memoir, Jeannie Out of the Bottle.

Eden had a singing career after Jeannie, appearing as a musical guest on many TV variety shows and starring in national tours of Broadway musicals. She starred in the film and TV series Harper Valley PTA, and continued to act in hit shows like Dallas.

Eden says she has no regrets about her time in 1960s TV, though she “doesn’t miss a thing.”

“I’m very happy that I lived during that time,” she told the Hollywood Reporter. “I’m happy that I had my beginnings then, but things change. What a wonderful time now, more actors are working than ever before with all of the companies like Netflix and Amazon, all of these movies and TV shows they are producing.”

The legendary actress has walked down the aisle three times in life. Barbara’s first marriage was to Michael Ansara, an actor who also has a star on the Hollywood Walk of Fame.

The couple tied the knot in 1958, and seven years later, they became parents when Barbara gave birth to a son.

“The same day that I Dream of Jeannie sold, the doctor told me I was pregnant,” Barbara said and revealed that she and her husband been trying to conceive a child for many years. 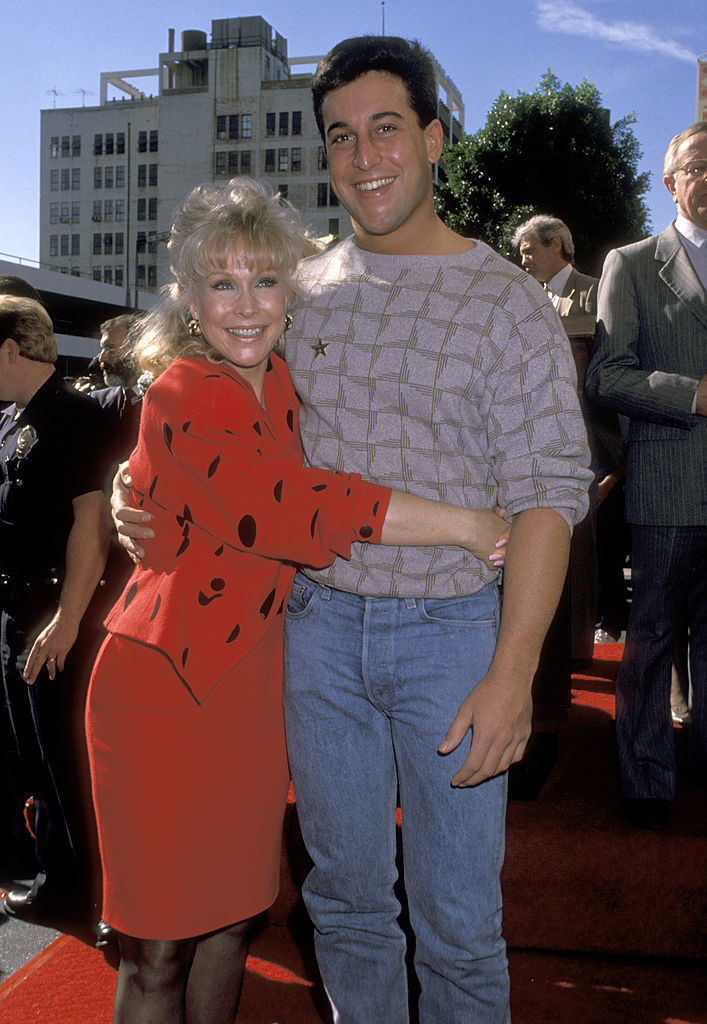 Matthew Ansara was born in August 1965, but his life became a struggle, and he battled his demons for many years. He became addicted to drugs at a young age, and Barbara tried to help him – but it was hard.

“You can’t force them to go to rehab … you can’t do anything. And when he really wanted to be well and clear and clean, he had a heck of a time,” Barbara told Closer Weekly.

No parent should have to bury a child, but in 2001, Barbara Eden had to say farewell to her only child. The actress’ son Matthew Ansara died of a heroin overdose, age 35.

Since then, Barbara has been dealing with feelings of guilt, but she always refers to him as ”a beautiful young man”. 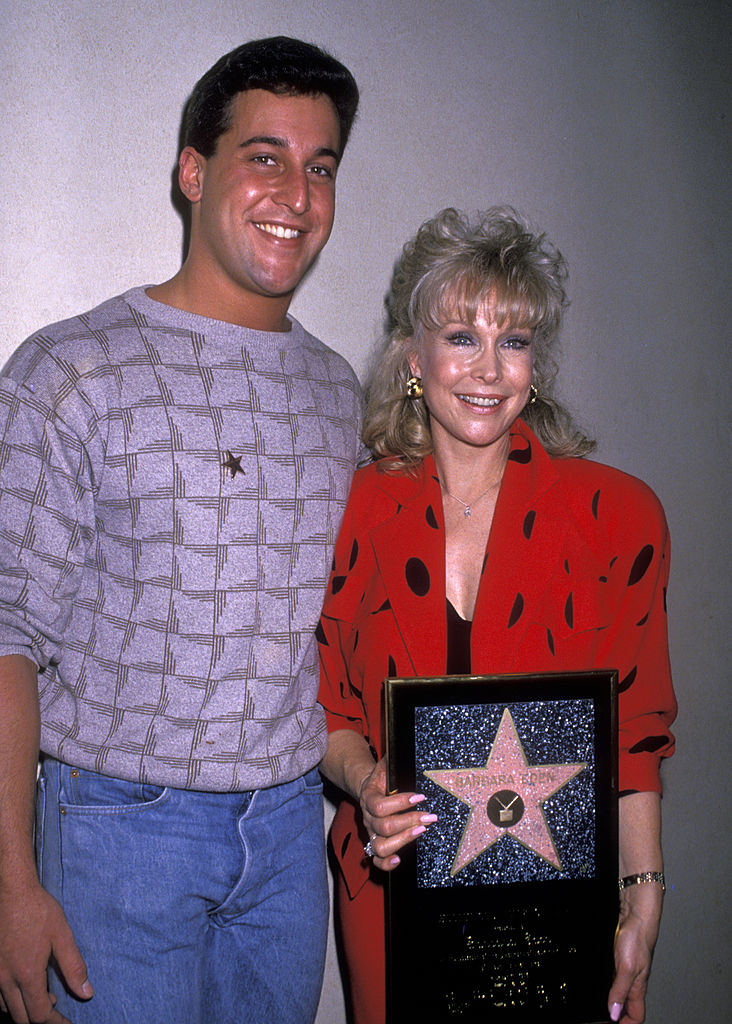 “When Matthew was clean and sober, he was such a beautiful human being, inside and out,” Barbara told People and continued:

“Drugs are inexplicable. It’s so frustrating.”

After two decades without her beloved son, she still mourns him.

“You’re gonna make me cry … I have his pictures around,” the 90-year-old actress said recently in an interview.

Today, she keeps his memory and spirit alive by talking about him.

“[I] don’t pretend like he never was. Because he was, he was [a] super, superhuman being.”

Matthew was her only child and she can grieve all her life for her son, she loved him, he loved her too. I understand her bereavement. No parent should ever have to bury their child!

Share this story if you love Barbara and I Dream of Jeannie!