A great American actor and a cultural icon.

John Wayne embodied the image of the strong, quiet cowboy or soldier, and personified the idealized American values of his time.

But his legacy is disputed, and in recent years more and more people have questioned the macho persona John Wayne adopted on and off the screen.

Even during the peak of John Wayne’s career, one thing, in particular, made people furious; the fact that he didn’t serve in World War II.

Today, we know the answer as to why – and it may come as a surprise ...

During WWII, over 16 million Americans served in the United States Armed Forces – but John Wayne, born Marion Mitchell Morrison, was not one of them.

Everyone in society was expected to contribute to the war effort and Hollywood was no exception. So how come ”The Duke” never enlisted? Many of his fellow colleagues didn’t hesitate to do their part – Clark Gable, Henry Fonda and Jimmy Stewart went to fight. But was John Wayne really a draft dodger, as many have claimed?

When the Japanese attacked Pearl Harbor in December 1941, the actor had started to make a name for himself in Hollywood. The 34-year-old Wayne wasn’t anywhere near a mainstream star, but his self-confidence was on the rise after starring in John Ford’s Stagecoach (1939). 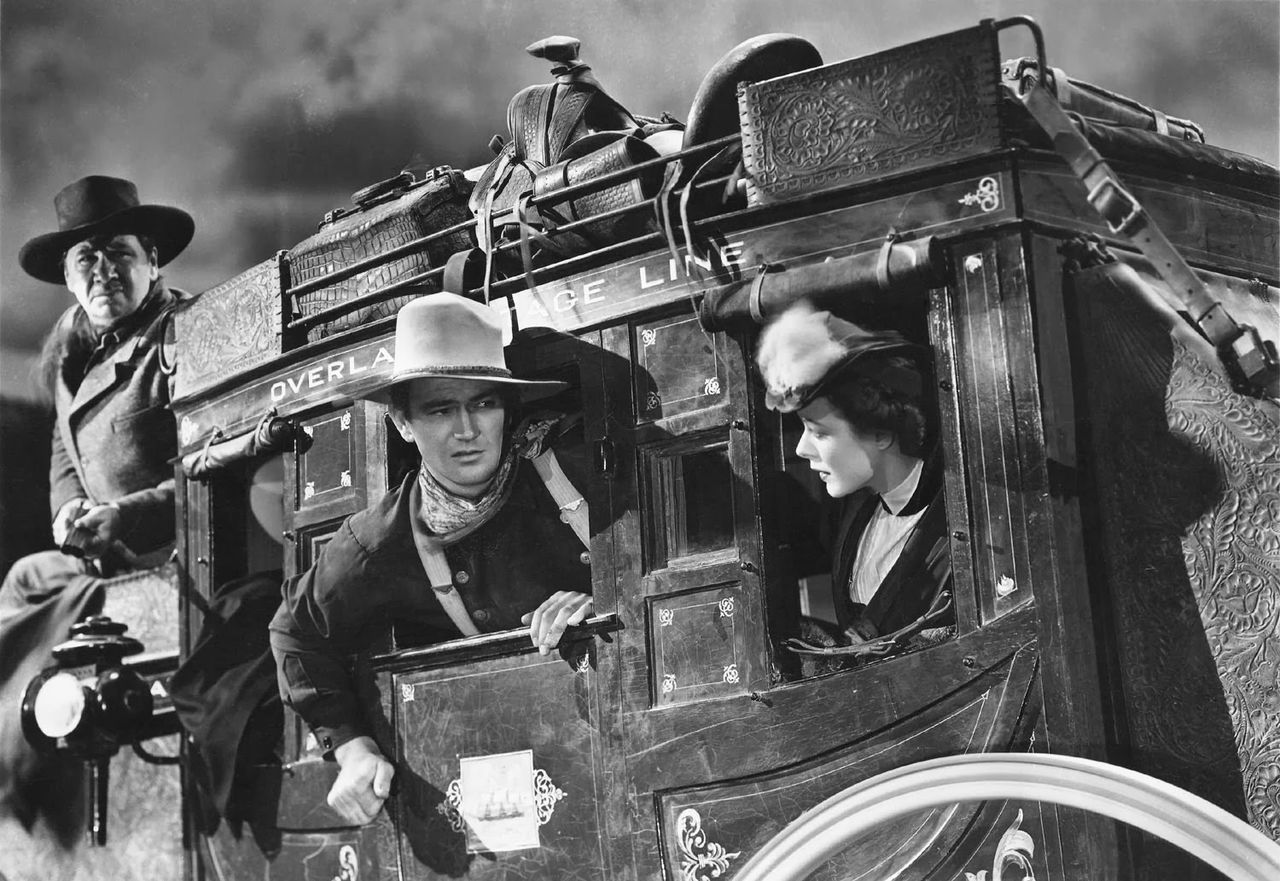 Stagecoach, a huge box-office success, turned Wayne into an A-lister. His place in Hollywood was established and grew with each consecutive year. With this in mind, World War II came at a very inconvenient time. He had a career that was taking off, and being drafted or enlisting could have potentially destroyed everything.

Wayne was simply afraid of losing his career, according to some sources.

”The Duke” also started making big money during the 1940’s – something that became of vital importance considering that his marriage with Josephine Alicia Saenz had collapsed and he still had four kids to support.

In 2014, author Marc Eliot launched another theory as to why Wayne didn’t participate in the war. In his book, “American Titan: Searching for John Wayne,” Eliot claims that Wayne was having an affair with actress Marlene Dietrich. Afraid of losing the relationship with Dietrich, Wayne decided not to enlist and fight.

“When she came into Wayne’s life, she juicily sucked every last drop of resistance, loyalty, morality, and guilt out of him,” Eliot wrote.

In 1943, Wayne filed for a 3-A draft deferment. As the sole provider for a big family, he was granted deferment from military service. But maybe we shouldn’t put all the blame on Wayne. In fact, he didn’t request deferment himself; Republic Studio President Herbert Yates did it on his behalf.

Yates had already lost his golden goose, Gene Autry, who voluntarily joined the Army Air Corps and became a pilot. He didn’t want see his second moneymaker, Wayne, put on the uniform and disappear.

The Republic Studio President was willing to go to great lengths in order to keep his only A-list actor on contract – he even threatened Wayne with a lawsuit if he walked away from his obligations.

According to Wayne’s friends, he wanted to enlist after he made some more movies – but it never happened. The Duke repeatedly wrote to John Ford, the highly respected and famous Irish director, and asked if he could could serve in Ford’s military unit.

In 1942, Wayne wrote to Ford, saying, “Have you any suggestions on how I should get in? Can you get me assigned to your outfit, and if you could, would you want me?”

Ford worked at the Office of Strategic Services and made several documentaries for the Navy Department. He also directed the the propaganda film December 7th: The Movie (1943) and was present on Omaha Beach on D-Day, with his camera.

Throughout the war, Ford would berate Wayne “to get into it”. The director complained that the actor was getting rich while other men sacrificed their lives on the shores of Europe and in the South Pacific.

Critics called Wayne’s application a “half-hearted effort”, but he did receive a positive response and was offered a position at the Field Photographic Unit. The letter, however, ended up with Josephine, Wayne’s wife.

She never told her husband about it.

In the end, it seemed that Hollywood, Wayne and the government agreed on what was best for everyone – the famous actor was given a special 2-A status and deferred in “support of national interest.”

Wayne, who starred in thirteen films during the war, told friends that the best thing he could do was make movies to support the troops.

The closest Wayne came to World War II was portraying the actions of others on the big screen, some say. To be fair, he did visit U.S. bases and hospitals in the South Pacific in 1943 and 1944, on an entertainment tour. The Hollywood star did his best to boost the morale of the troops, but it wasn’t easy for the famous actor to impress scarred combat veterans.

One time when Wayne walked out on stage in Australia, he received a chorus of boos from the audience.

“Duke largely could not get an officer’s commission to enter the military because he had an old injury, which would have kept anyone from being eligible, and also had four children. Also, the powers that be saw the immense contribution Duke could make on the screen to help national morale. His overall roles involved our exposure to what we were fighting abroad, and he also went on many trips drumming up support. He gets a bad rap for not being in the fight as others were, but let no one make that mistake. He was the real deal, no matter where he showed up,” film scholar James Denniston said in an attempt to put things in perspective.

In a New York Times Magazine article, author William Manchester gave an interesting testimony from his time serving¨in the Pacific. Manchester got wounded and had been evacuated when he got the chance to see John Wayne, the great American actor, and cultural icon.

”After my evacuation from Okinawa, I had the enormous pleasure of seeing Wayne humiliated in person at Aiea Heights Naval Hospital in Hawaii … Each evening, Navy corpsmen would carry litters down the hospital theater so the men could watch a movie. One night they had a surprise for us.

”Before the film, the curtains parted, and out stepped John Wayne, wearing a cowboy outfit – 10-gallon hat, bandana, checkered shirt, two pistols, chaps, boots and spurs. He grinned his aw-shucks grin, passed a hand over his face and said â€˜Hi, ya guys!’ He was greeted by stony silence. Then somebody booed. Suddenly everyone was booing. This man was a symbol of the fake machismo we had come to hate, and we weren’t going to listen to him. He tried and tried to make himself heard, but we drowned him out, and eventually he quit and left,“ he said.

Two decades after his death, a BBC documentary called The Unquiet American shed new light on why Wayne didn’t serve during WWII.

According to the filmmakers

Wayne had a number of trivial excuses. One example? The actor claimed he didn’t have a typewriter to complete the appropriate forms.

“It was a purely careerist move. [Wayne] manipulated it so he didn’t have to sign up and could fill the vacuum left by the other Hollywood stars who did,” The Unquiet American’s producer James Kent told The Independent in 1997.

“Later he found himself a flag-waver and arch Commie-baiter with no military record.”

John Wayne’s decision not to serve would haunt him for the rest of his life, according to the book John Wayne: American. His post-war patriotism sprang from guilt. Many labeled Wayne a draft dodger. 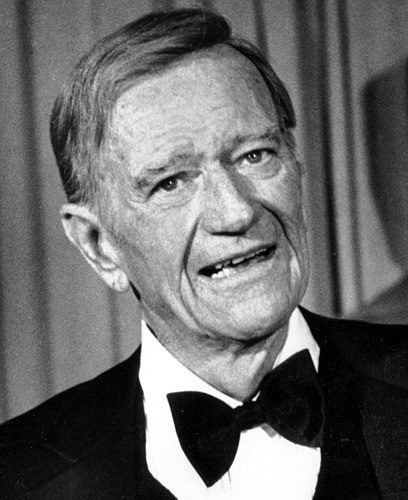 He would become a ‘superpatriot’ for the rest of his life trying to atone for staying home,” his widow, Pilar Wayne, wrote.

John Wayne succumbed to stomach cancer in 1979. One year after his passing, Wayne was posthumously awarded the Presidential Medal of Freedom by President Jimmy Carter.

In recent years, his legacy as an American titan has been tarnished and his actions during World War II are a big part of that. An infamous interview with Playboy in 1971 hardly helped.

Even today, John Wayne continues to divide the American people. Many who grew up with his films hold him as one of the best ever actors, and don’t want to mix his political views with his acting.

Others don’t think he was anything special as an actor, not even close to the likes of Jack Nicolson, Dustin Hoffman, Leonardo DiCaprio and Gregory Peck. The fact that he didn’t fight in the war still bothers many.

What do you think of John Wayne?